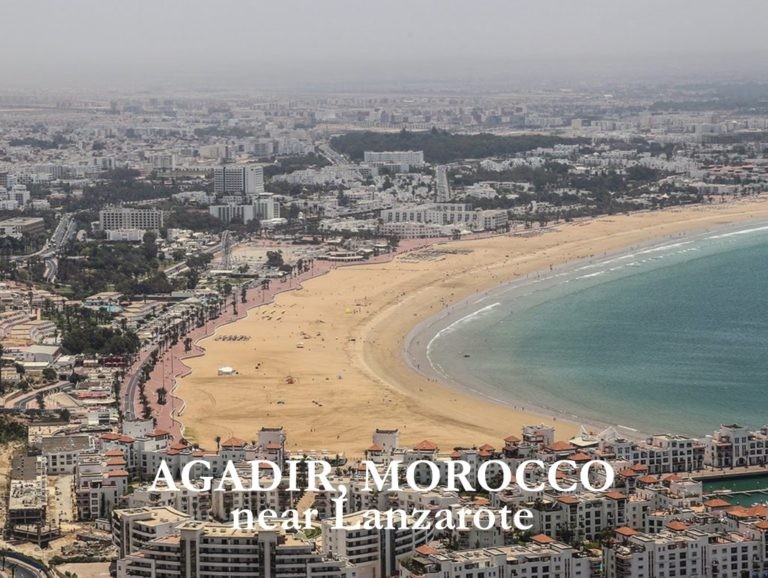 Agadir, so near to the Canary Islands, and a TUI Marella cruise is stopping there, so we expect some pictures and comments and maybe a film? Here are our notes. Agadir is sometimes said to be the Miami of Morocco. It is normally sailed to just before or after Lanzarote on a Canary Island Cruise. Agadir is Morocco’s main beach resort just north of the Sous river flowing into the Atlantic Ocean. With 300 days a year of sunshine it offers a chance to just relax on the sand. Or you can take a local bus North to visit the ruins of the city’s ancient Kasbah; all that remains of the ancient Kasbah – built in 1540 – are the fortified walls on a hill to the north of the bay. Here there are great views down over the memorial park, created where the medina used to stand. At this stop you will also find typical Moroccan souks including the colourful El Had souk where you may find your French useful. Many will speak English but the main language is Moroccan Arabic. Agadir is the seventh-largest conurbation in Morocco and was destroyed by an earthquake in 1960 and is now completely rebuilt 2km south of the destroyed city now to mandatory seismic standards. Agadir is in the foothills of the Anti-Atlas Mountains and is famous for its golf courses, so expect some of the crew to be heading there!  Here is a look at Agadir Beach …..Tours available from your ship and privately all listed here

For the brave, cliff and rock jumping

North Africa has been mentioned historically since the second century, but there has been little about the area that Agadir sits in. In the 12th century a Berber tribe the Mesguina, that is to say the Ksima are mentioned. Agadir is first found on a map in 1325 and the Portuguese founded a trading post there in 1505. In 1731 it was destroyed by an earthquake then the Dutch founded a trading port there about ten years later. It has a mixture of styles and influences.

Fred Olsen lists Morocco as a destination, and often list Agadir and connects it with the Canary Islands as it is not very far from Lanzarote.