Rome – Angels and Demons is a great way to see Rome, having first refreshed your memory by watching the Ron Howard film of the Dan Brown book before you go. Sadly Tom Hanks will not be running around for you but the guide will bring the book and film to life. And please, do not confuse this with the Robbie Williams biography of the same name! Jean’s little fun film is actually a great way to plan to see Rome.

OUR GAME OF THRONES TAKE ON DUBROVNIK

Tom Hanks in Rome – who does he play? What’s up? To explain. Tom Hanks plays Robert Langdon, a character born in New Hampshire USA in 1964. The book, written in 2000, was probably written to be a movie, with its short chapters, continuous cliffhangers, and high pace. Another trait is the lack of description Dan Brown affords Langdon in the book; more typical of a movie script when the actor, costumier and director form part of the team who shape the character. In the movie Hanks is described as ‘Harrison Ford in Harris Tweed’. Langdon plays water polo, suffers from claustrophobia and has an eidetic memory and phenomenal problem-solving talents. He is very clever! It is said Robert Langdon is named after John Langdon a graphic & ambigram designer, a writer, and Typography professor at Drexel University. Click the advert then use the code.

The Book and the Movie …. what happened? In the book and film Angels and Demons: The European Organisation for Nuclear Research (CERN) ask Robert Langdon (Hanks) to shed light on the religious symbological implications of the death of a well-known scientist, Leonardo Vetra. Langdon is joined by Vittoria Vetra (Leonardo’s daughter) and they journey to the Vatican to unlock the mystery behind the Illuminati, an anti-Christian secret society. In an effort to find out who killed her father they are fronted with the mystery of the Illuminati and a nuclear weapon at stake. Thus, following clues they arrive too late each time, as a Cardinal is killed in a way in keeping with one of the four elements, earth, air, fire, and water. Naturally, by the end of the movie, they solve the mystery of the Illuminati.

To get you in the mood; the movie trailer. Reading will read will make sense.

If that makes you want to do more research, why not? Now past its release, you can buy it very cheaply on Amazon. The cheapest way to get the book seems to be in a set (great deal), and there is the rental Amazon option with DVD. Here are the links.

The guides are good, but finding a guide for this tour can be hard. It sells out weeks before the date. Sometimes months if a big ship is going. Some tours start at 9 am, and for cruisers that can be tough as Civitavecchia is an hour away. So we will guide you through the main bits. The Simple Tour – If you are a cruiser you don’t have long, so we suggest earth, air, fire, and water with a few additions. The most important church is FIRE and it can be closed after 11 am and before 4 pm so get there early, late might not be possible if on a cruise.

Water – Piazza Navona is one of Rome’s many beautiful squares. It used to be an ‘open stadium’ for games back in the day. In the 15th Century, it was turned into a public square and a market moved there. In the centre is a huge obelisk and below it is the Fontana dei Quattro Fiumi, the Fountain of the Four Rivers. In the film, the fourth cardinal was drowned in the fountain.

At the top of the complex statue by Bernini is a bronze hen pigeon, symbolizing the peaceful work of Christ. The four fountains are personifications of the four rivers in the image of Bernini’s collaborators who were from the then four known continents. The Danube as Raggi; the Ganges as Poussin; the Rio Della Plata a Baratta; and the Nile as Fancelli. Our Piazza Navona film shows you where to find the square then how to walk round the corner to the Pantheon. Click here.

Pantheon – just around the corner from Navona. The Pantheon does feature in the film but it is a false lead. Annoying, as it is the best example of a Roman building still standing. Pantheon literally means ‘temple of the Gods,’ it was first built by Augustus just before the time of Christ, 27 BC. It was rebuilt by Hadrian in 127 AD. Two monarchs are actually buried in the Pantheon, Victor Emmanuel II and Umberto I.  Hadrian died a few years later and his ashes were put in the Castle because it was then his mausoleum. More of that later. Outside there is the usual Egyptian obelisk, this dates back to the 6th century BC, supported on an elephant’s back. The Pantheon is also featured in Peter Greenaway’s film The Belly Of An Architect. Also on our film of Piazza Navona.

Earth – Santa Maria del Puopolo – Just north of the Pantheon, across the imposing Porta del Popolo, is the church Santa Maria del Popolo. Inside the church, the book suggests eight chapels, but there are six (the one in the film and maybe one other were built in the studio, obviously! That makes eight. The book is dramatic interpretation, so forgiven). 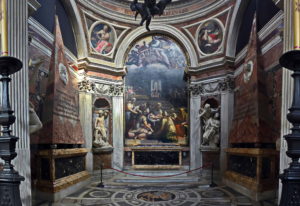 In the book the first Cardinal was found dead with his mouth full of dirt, that is made up too! This was in the Chigi Chapel, but a studio version. Oh, and just to add that until 1826 the Piazza del Popolo was used for public executions. Picture by Peter1936F click picture for Wikipedia page and credit details 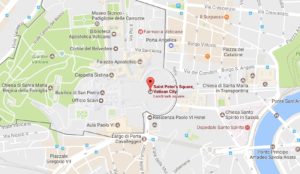 Air – St Peter’s Square, Piazza St Pietro, Vatican City – This second Cardinal dies from punctured lungs and the place is marked by a spot on the ground in Vatican City. The city border is the rail that separates the road from the main part of Piazza St Pietro. It is a circle and represents an angel blowing. It is known as West Ponente wind rose tile. It is located on the west side of the base of the Vatican obelisk in the centre of the square. My guess is you won’t be the only one looking for the round ‘manhole cover’.

CRUISE GREECE  OUR GAME OF THRONES TAKE ON DUBROVNIK 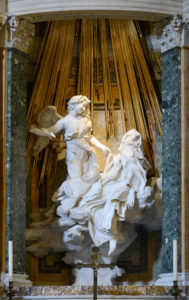 Fire – Santa Maria della Vittoria – This is the best. The third Cardinal was engulfed in flames. St Theresa of Avila was the first recognized Carmelite saint, canonized in 1622. In her autobiography she describes an encounter with an angel: ‘I saw in his hand a long spear of gold, and at the iron’s point there seemed to be a little fire. He appeared to me to be thrusting it at times into my heart, and to pierce my very entrails; when he drew it out, he seemed to draw them out also, and to leave me all on fire with a great love of God.’ I doubt there was a double meaning 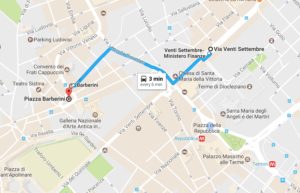 to the writing. Or maybe there was, just before Bernini created this, he had fallen into disgrace due to his involvement with the reckless decadence of the Barberini papacy. His aptly named work Ecstasy of Saint Teresa sees her as the central sculpture in a group in the Cornaro Chapel inside Santa Maria della Vittoria. The novel and movie place this church near Piazza Barberini. However, its actual location is on Via XX Settembre on the other side of Termini train station. Click picture for Wikipedia page and credit details. (Bus stop 1 on the Big Bus route.)

The Final Clue – Chapel of the Illuminati – Castle Sant’Angelo – Castle Sant’Angelo was built by Hadrian as a mausoleum for him and his family. His ashes are now in there. The exterior and the famous bridge opposite are seen in the Vatican film on our general film on Rome. It is now a museum. The interiors were a built film set. The exterior is shown on the Doris Visits film of the Vatican.

The Vatican – they were not allowed to shoot inside – Films have to cheat because of the months they take to shoot, much too long to close down these tourists sites. Let’s be honest, it is Rome, apart from not being able to move about they could not park the trucks. The long-term disruption would not work. So almost all of the Rome interiors were recreated and built in the studio, even the Sistine Chapel. However, when filmmakers can they use available buildings to look like the ones they want you to believe they are. One such building with access, parking and which avails itself to films and functions is the Royal Palace of Naples, and some of the Vatican interiors were shot there. Like the huge marble staircases. So don’t go looking for those in Rome.

Il Passetto – The 800-metre wall, Passetto di Brogo runs from the Vatican to the Castle and was erected in 1277. It is in the film although that might be a CGI run by Hanks, superimposed on an ariel shot with no Tom Hanks. The wall contains the passage along the top and a secret tunnel. It was used for moving prisoners and fleeing popes. This is seen in our Vatican film. Two popes have used it to run from danger; Pope Alexander VI in 1494, when Charles VIII invaded. Pope Clement VII in 1527, when troops of the Roman Emperor, Charles V, massacred the Swiss Guard on the Basilica steps.

GUIDES AND TOURS MADE EASY FOR YOU Choose from these many tours in Rome and book direct CLICK HERE
CHAT GROUP – Cruise the Mediterranean Chat – New Group, be one of the first to join and start a thread on your forthcoming or past cruise by number – – CLICK HERE TO SHARE & CHAT