Our four previous Athens films have been cut into one bumper informative guide with new footage from the Ancient Agora near Plaka which we filmed early in 2022. Whether it is your first time there or you have been to Athens many times, there is always something new to discover. Like the riviera and beaches of Piraeus which you could do in the afternoon after a morning in the city or at the Acropolis. It could all be on one easy Metro ticket.

Athens, like Lisbon, Barcelona, and Barbados are recurring ports for cruisers. It is not just a port that a ship might visit en route to somewhere else, but it can be a port in which to shelter from a storm or as an alternative interest when other destinations are unavailable. We once stayed there for three days because the weather curtailed access to the Santorini and Mykonos.

We had four films full of information on Athens and have cut them into one which shows the many ways to travel from the port of Piraeus to areas of the city of Athens. It ranges from the changing of the guard, to the ancient sites of the Agora, Zeus, and the Acropolis. Jean then shows you the stadium. We even take a horse and carriage. Athens can be so much fun, and yet it can be so cheap. Jean shows you how to see it all and have a tour all for around ten euros each. One side of Plaka is Monastiraki, other side is Acropolis Museum and Akropoli Station

Also, as most of these ruins and monuments are so huge it can be a challenge to photograph them. In our film, you might see a few angles that work, or do not. The shots of the Acropolis are shot on a 200mm lens from the hill opposite which is free to climb.

Carry only what you need and watch for pickpockets.

Their version of VAT or sales tax can add 25% to your purchases. If you want to try to claim that back, carry your passport, get proper receipts, and then look for signs showing shops that offer the refund service.

You may do the shops and museums in the morning as many close for siestas in the afternoon. That might mean that the afternoon is time for the beach. Just as in Italy, you MUST validate bus tickets BEFORE you get on the bus. Public transport is easy.

Take proof of age if expecting to get senior discounts but not everywhere offers it as the places are well older than you!

If you are not an explorer, then the red bus could be an option. Or the Metro and the Happy Train. The film explains all.

Athena, the goddess of wisdom, competed against Poseidon, the god of the seas and Athens has had a port since 4BC. But the new cruise terminal at Piraeus has three terminals, (Megas Limani, Zea Limani and Mikrolimano) and they are less than a mile from Piraeus and eight miles from Athens. There may be a shuttle bus, though these shuttles to Athens can cost up to 20 Euros.

The Hop On Hop Off Bus now sounds attractive being just outside the cruise terminal, but the new metro system is a cheap, easy, clean way of getting around. Like visiting Rome, you may need a plan, whether based around the metro or the bus. Public bus to the Metro is easy. If it is open buy a ticket at a kiosk to the Acropolis from the cruise terminal, look for the X80 it should be about 4.50 Euro. But it is only Euro 1.40 each way on the metro train. Either walk around the harbour to it or get the bus going left over the road. 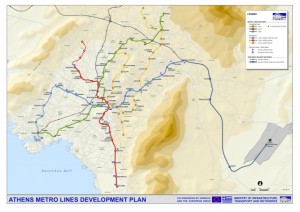