No bus or coach can park outside or anywhere near Sagrada Familia, whoever they think they are, so

the tube is the answer for ease and closeness.

Barcelona is a place of great food, great wine, wonderful architecture, fountains and art. It is a place where every nation and religion mix together. The art starts at the port but as a cruise passenger you have no chance to see everything in a day; which is good. Barcelona is a place you can go back to many times. The cruise or port shuttle takes you to the trade centre just below Columbus’s statue. Cross the road and you are not only at Las Ramblas but the Metro. It is no more than a short walk and you can spend the whole day just walking round this area or riding the Metro to destinations. Barcelona is an easy town if you plan. If you work out where you are going and which tube/Metro station is next to your destination. Two people can share a ten journey travel card on the Metro, five trips each. Jean goes straight to the Sagrada Familia. Given that traffic has no been banned from stopping anywhere near hear, the Metro gets you closest by far. Then she travels and walks back through town, using the Metro ticket again and again. Cheap day out in Barcelona.

Barcelona is a big city, we have a few films to help but looking at the tours they offer helps see what is there. Gaudi is on a separate video blog with a visit to Park Güell. Montjuic Hills and Museum is another film. We took the Metro there, but the other of the two hills has the castle and there is a Sky Lift that takes you from the port. Let is start with the Metro because it is important if visiting Barcelona. In the film Jean shows you how to use it; the Metro is very easy, but you should plan what you want to see and search the local Metro Station that is near before you arrive. Local maps are not always the best at connecting tourist destinations with metro stations. We get you to the church on time!

The Sagrada Familia was started in 1882 and Gaudi took over the project the following year. By the time of his death at the age of 73 less than a quarter was built. That was in 1926 and it appears little has changed and there is cache value in the famous unfinished church which you may well have to queue to see. See our film on Gaudi’s Park Güell.

Barcelona, Camp Nou – There is so much to see, not just Barcelona’s Football Stadium. The Camp Nou Experience has become an obligatory stop for visitors to the city and it is on the Hop on hop off bus route, which is great value for money and one of our favourite Hop On Bus tours. The Experience gives the chance to walk through the most emblematic areas of the stadium – their description.  The stadium seems to get mixed reviews depending on the guide you get and their football knowledge. Let’s start with a film on the number one attraction. Getting to Sagrada Familia.CHAT GROUP – Cruise the Mediterranean Chat – New Group, be one of the first to join and start a thread on your forthcoming or past cruise by number – – CLICK HERE TO SHARE & CHAT

Art is all around you once you enter Barcelona, and much is from or influenced by Gaudi. Antoni Gaudi was a Catalan Architect born in 1852 and we have a seperate page on him which includes Park Guëll on Carmen Hill and Gaudi's Sagrada Familia. 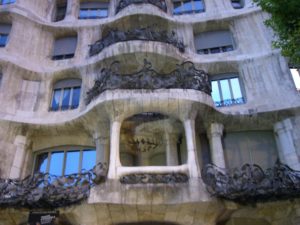 If you are worried how to choose which cruise, which ship and where to go, take a look at our how to choose a cruise blog. Why not have a look at the LATE DEALS over a coffee. Doris Visits allows you to SEE THE CRUISE BEFORE YOU CRUISE THE SEA. We have videos of many of the cruise stops you might make from Miami to Tahiti, from Tallinn to St Maarten. Please follow us on Facebook and Twitter and share.

BOOKS SET IN BARCELONA 'Origin' by Dan Brown has Barcelona as a main location; Langdon finds himself being hunted. He escapes with the museum’s director, Ambra Vidal. Together they flee to Barcelona in the search of answers, to where Edmond Kirsch once lived Kindle or Hardcover on Amazon

BOOKS SET IN BARCELONA 'The Antiquarian' Novelist Enrique Alonso’s world is turned upside down when he receives an intriguing letter from his adoptive father, Artur, a well-known antiquarian in Barcelona. Kindle or Hardcover on Amazon