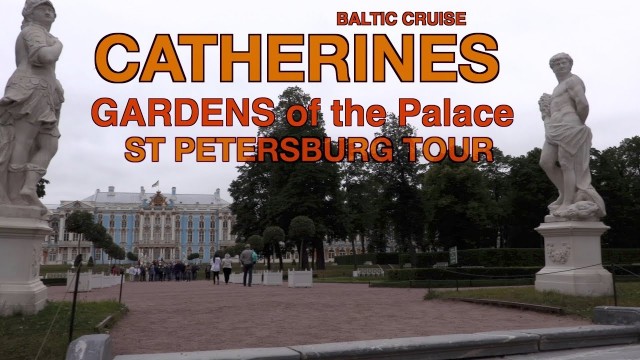 The Park and Gardens fail to get described in most searches of Catherine Palace, that is because the Palace is so overwhelming.

We have to admit that the fountains and gardens at Peterhof do manage to gain their own attention for reason. This will be a half an hour tour and try to insist on seeing the vocal group that sings in the conservatory. We were too early and they had not started. If your tour is slow it will be omitted. The parks and pavilions house exhibitions and children’s activities which ship tours will not have time to see, but the ship tour gives you the English guide. The private tours from the ship are more expensive but you will see more and at your own pace. St Petersburg has always been well known to Baltic Cruisers who have entered without a visa and without a problem, but since the World Cup in Russia, the whole world is seeing that the country is full of humans similar to ourselves. As Sting says, we hope the Russians love their children too, and they do, and they love the England football team.

The Palaces are as special as the football stadiums, but it is the latter that has caused the new superhighways that help you get to the Palaces quicker from where the cruise ships dock. Catherine Palace Gardens will be about a thirty-minute walk before or after the Palace, and there is a market over the road from the entrance. The stalls all appear to sell the same tourist fodder. They will normally take Euros or Dollars even though that is still technically illegal. Photography is now allowed at the Palace.

We have a separate film of the Rocco Palace including the Amber room and the great ballroom. Photography is now allowed inside though sometimes the Amber room is not allowed. We were there during the World Cup when the ultra-friendly approach seemed not to mind filming in the Amber Room. It is an astonishing place.