Fred Olsen pride themselves in the personal touch they can give on their smaller ships, and despite discussing a possible new ship they have said they will stay small. The routes they find for their ships are envious, stopping at some special places other ships cannot go to. For those who love these ships, here are the Facebook Chat and Community groups for Fred Olsen where you can share pictures, experiences and knowledge, and find answers from the many faithful who love the ships. Please pass this on and include others.

FRED. OLSEN FLEET OF SHIPS on one community chat sites. Click to join.

The Fred Olsen fleet consists of deliberately smaller ships. They are considering a fifth ship, but have said that it will stay within their known sale and image. Dress code is stricter that some lines after 6pm. They have dance hosts and some of the older cruise traditions are upheld.

Ever wondered how to become a dance host? See our section on working at sea.

We love these ships and although we haven’t been on them for a while we have colleagues, like Marty Kristian from the 70’s band the New Seekers, who are on them regularly.

The Fred Olsen story is an interesting one, starting in Oslofjord, on the way to Oslo. This is the menu for the four ships and we list many films to give you a flavour for the style of Fred Olsen. Want to know more about the ships in this fleet, take a look at the growing Doris Visits menu of Fred Olsen ships. 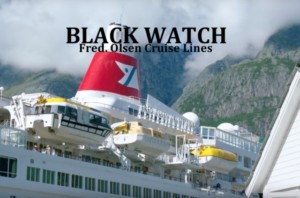 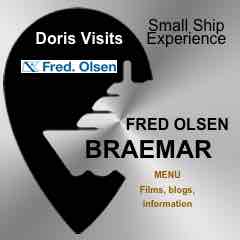 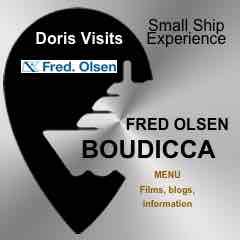 Cruise Brochures of the Fred Olsen ships will appear below.