Cruising: Doris Chats We love to cruise
Home 11 Baltic Malmo Malmö, Sweden – one side of the great TV series THE BRIDGE 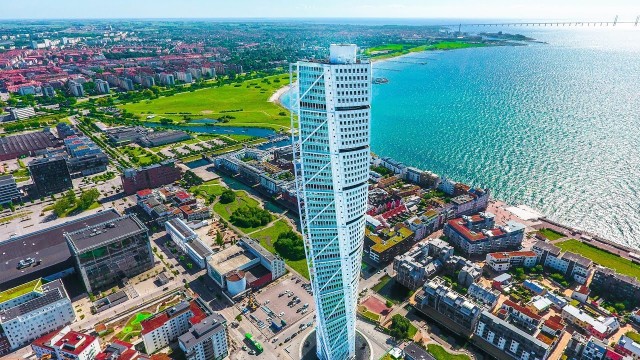 Malmo is said to be Sweden’s most cosmopolitan city. Maybe because, from the harbour, the Öresund Bridge, links Malmö to Copenhagen, Denmark’s capital. In the TV series, a body is found in the middle of the bridge laying half in Sweden half in Denmark. The show became the inspiration of the UK series the Tunnel. Everything sits in the shadow of the huge skyscraper the Turning Torso. The Öresund Bridge is quite something, the world’s longest cable-tied road and rail bridge. The West Harbour, the Västra Hamnen is known as the City of Tomorrow.

Like much of the UK’s older docks that have been re-developed, this former shipyard and industrial district is now an ultra-modern magnet to tourists. It is a trendy stylish, carbon-neutral area of cafés, bars and restaurants and pretty parks with many places for foodies. It’s all overlooked by the soaring Turning Torso, Scandinavia’s tallest building amongst the office blocks and luxury apartments.

The city is an easy one to walk around, many people speak English, many sites are familiar and it has the same multicultural feel the UK has. Malmo has classic old world-Scandinavian charm with historic districts, including Malmo Castle and picturesque squares of Stortorget and Lilla Torget in the heart of Gamla Staden (Old Town). Whilst few UK ships go here, the Balmoral and Boudicca are Fred. Olsen ships that goes here.

Here is our Doris Visits tip. Although Mamo has a lot to offer from Middle Eastern markets to Italian coffee culture, but maybe just hiring a family pedal and casually going round the canals will be the real treat. Take a look at this wonderful DRONE film that shows it all Join your favourite ship’s CHAT & COMMUNITY on Facebook – click here to see

And read the cruise with action leaping between above and below decks.