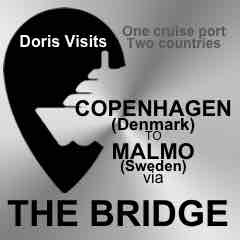 If you dock in Malmo with the intend of seeing Copenhagen, you can’t walk it but the train from central station to central station is easy. The journey across the Øresund (Danish) or Öresund Bridge (Swedish) is on the under tier / level, cars travel on the top. It will take 39 minutes on either train 029 or Öresundstäg train along the 8 km of amazing engineering. The bridge actually goes from Sweden to an artificial island called Peberholm, the journey into Copenhagen continues using a 4km Drogden Tunnel. You will have seen it endless times on the TV show. If you want to go across the bridge by bus there are a few options, one is here. Another is here.

The Bridge, famous enough is the star of the TV series The Bridge. It is not a story about linking two cruise ports, maybe that might be series 5, because the first 4 series have all been about murders. It starts with a dead body on the border in the middle of the bridge and Swedish detective Saga (Sofia Helin) has to work with Danish detective Martin (Kim Bodnia)

Sofia plays a smallish part as the ‘Boy’s Mother’ in the new Michael Fassbender movie The Snowman, which also stars the other currently famous Swedish actress Rebecca Ferguson.  Kim Bosnia left the series after two series, a great loss but the series doesn’t mind killing off the characters you like, just as Dubrovnik‘s Game of Thrones does. He has been shooting the TV mini series Watershed Down where he is the voice of Kehaar.

Essentially it means if you land in Malmo, you can see Copenhagen, and if you have been to Copenhagen many times are are a fan of the show, you can see Malmo. See our cruise guides, films and tips for both cruise ports.

This bridge and tunnel, with the Great Belt Bridge which many cruisers will have sailed under (see our film of sailing under) has connected western Europe with Scandinavia.

It also carries a data cable, as most data still travels by cable. There are no passport checks and few customs checks between the two countries on this bridge which was opened in 1999. If it had been built back in 1936 when proper it could not have been this spectacular.

Disaster in the Baltic ! If you like a novel with a threat of murder – Violet was a passenger and has now found work on the ship in marketing and as an older model. A shock lease of life at her age. The novel that takes place on a Baltic Cruise, life isn’t that easy! Action romance on a cruise with adult themes.Follow author Sally Katz by clicking her name and then on the author page on Amazon, click follow. Then as she releases a new book your are informed.Find your ship’s chat site + share your pictures + experiences to help others    ALL THE BALTIC DESTINATION GUIDES Take a look around Doris Visits and get more out of your cruise research – guides, tours, cabin tours, ship tours, news. AARHUS  COPENHAGEN FREDERICIA GDANSK GOTHENBURG HELSINGBORG HELSINKI KALUNDBORG KIELE KLAIPEDA MALMO OSLO RIGA SKAGEN ST PETERSBURG STOCKHOLM TALLINN TRAVEMUNDE VISBY WARNEMUNDE WARNEMUNDE