If you are interested in why Malta is the Hollywood of the Mediterranean where films like Captain Philips were shot, then read our filming on Malta blog by movie director and stuntman Stuart St Paul. Valletta, the southern most capital of Europe, is easily explorable by public bus, but this film walks you round Valletta, which is also easy to do. Valletta has the deepest natural harbour in the Mediterranean and the fortifications made there show the importance of her strategic position. Just as it serves as a transit port for fly-cruise. Malta’s Grand Harbour earned her the George Cross in WWII. When you sail out of Valletta, or in, if in daylight it has a skyline of many cultures steeples and church domes.DORIS VISITS WESTERN MEDITERRANEAN MENU OF PORT GUIDESDORIS VISITS EASTERN MEDITERRANEAN MENU OF PORT GUIDES 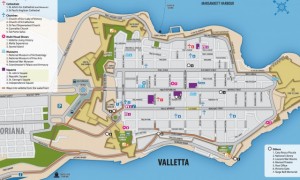 If you want to walk off the buffet, the town is a 20 minute steep climb, or there is lift or elevator up for one Euro just a few hundred meters from the terminal, as seen on the film.

Valletta is a great city to stroll round. Printable Valletta map click here or picture.

Valletta contains many buildings from the 16th century, built during the rule of the Order of St. John also known as Knights Hospitaller. We take you from the lift, the main square and Parliament building, down past the original palace and courts where Napoleon once stayed, down to St John’s Cathedral (separate film of the inside) down to the Grandmaster’s Palace, beyond to an older Palace in the terrace as you walk down to Fort St. Elmo at the port and the Knights hospital. The we walk up via another route and find the Market and St Paul’s Shipwreck Church. Then up past the Roman Theatre to the Millennium Walkway and the new Square where the bus garage is.

This is an easy wander, lots to see, lots of places to stop and drink. Much of the fortress and bastion built around the Grand Harbour and dating back to 1565, and the original fortifications were there earlier under the Ottomans.

Marella Cruises to the Eastern Mediterranean – click here for Marella Cruise’s own web site – Eastern Mediterranean Cruise deals pageMarella Tours are probably similar to other ships, these include – Malta Panoramic – This driving tour takes in some of Malta’s most famous sights – everything from bomb-proof buildings to natural wonders are on the agenda. First up, you’ll set off on the coach and head for the historic city of Vittoriosa, where you’ll get to see the Church of St Lawrence, which is home to the observation tower used by Grand Master La Vallette during the siege of 1565. From here, it’s on to Marsaxlokk, Malta’s largest fishing village, where you’ll have some time to explore before getting back on the coach. Next up, you’ll drive through some tiny villages before reaching the Blue Grotto – a cluster of picturesque sea caverns on the south coast. Then, you’ll pass through the town of Girgenti, home of the Prime Minister’s summer residence, before making tracks for the Dingli Cliffs – Malta’s highest point. From here, you’ll drive through Rabat, and around the edges of Medina, Malta’s old capital city. Lastly, there’s a stop in the town of Mosta, which is famous for its church, which was hit by a shell bomb in World War II. The bomb went through the property but, miraculously, didn’t explode.There’s a chat group for your ship – click here to find it

Highlights of Malta – Your tour kicks off just a short coach ride from the capital with a visit to the ‘Malta Experience’ – a spectacular show bringing to life more than 7,000 years of history, followed by a visit to the Barrakka Gardens, Valletta’s most beautiful garden with a breath-taking view of the Grand Harbour and the old towns of Senglea and Vittoriosa. Afterwards, you will have the opportunity to walk the main attractions of Valletta like the exterior of the Grandmaster’s Palace, the House of Parliament and the outside of Castille Palace. You then make your way to Medina, the ancient capital city, for a wander around the bastions and ramparts. You’ll also get the chance to go inside the beautiful St Paul’s Cathedral. Next comes Rabat, a town just outside Mdina, famous for its crafts and local trades. Here, you’ll make one last stop at the ‘Tales of the Silent City’, where you’ll get some free time to shop for take-home trinkets, before re-boarding the ship.Marella Cruises to the Western Mediterranean – click here for Marella Cruise’s own web site page for – Western Mediterranean Cruise deals page