We were privileged to assist Manuel Martinez at the Hammersmith Apollo as his official box carrier and picture taker. He was live in a sell out Apollo special, on the bill after Jo Brand and Dara ó Briain and after him was the elegant Sophie Ellis-Bextor. Manuel in his guise as the Quantum Mind Reader in professor Brian (and Robin’s) Cox’s special Christmas live at the Apollo. He pulled Jim Al-Khalili OBE on stage into his act after being introduced on stage by comedian Robin Ince who co-hosts Radio 4’s ‘Infinite Monkey Cage’. Manuel, had flown in from Grenada after leaving the Azura, and was up at 5am to fly back to St. Lucia to join the Britannia. It is at sea that these 1000 seater theatres now tempt the best entertainment. As Manuel Martinez the cruise ship comedian (& magician) – Hailing from Havana, Cuba, Manuel Martinez is the number one export after the cigars. Dispatched by the Cuban presidency, Manuel Martinez is Cuba’s diplomatic ambassador of comedy. An act that is as comical, witty, outrageous and unpredictable as any I have seen. It is an act you will not forget, even if you forget the excellent singers and other entertainers, this act is unique and self effacing. BA say his luggage may follow him, it was lost on the way to the UK.

If you want to see all the Britannia’s future cruises in one long list to make it easy to see the options and dates – click hereClick here for the special CARIBBEAN SEASON menu. Islands and Caribbean Season Destinations here !

Have you seen this great comedian, let us know on the chat group.

Manuel Martinez is a regular on the cruise circuit, as you will have heard me say, where else is there for such great acts to play? The entertainment on board ship is like no other.
Manuel Martinez may be homeless but he moves between the most prestigious cruise ships, off one, on the other. He is a regular for P&O, Royal Caribbean and Celebrity.
Warning, be brave if you dare to get on stage with him.
Follow him on Twitter    Manuel Martinez web Site
The Eric Clapton tribute 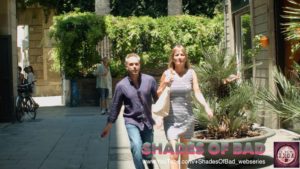 He is also an actor, when there is time, and recently appeared in the offbeat drama Shades Of Bad. He first three episodes were shot in a few hours while docked in Barcelona … what else do you do in a port you have seen a hundred times?

Check out some of the great Cruise Routes, our concise films of what a ship offers when it takes a specific route. These are typical routes but we do have films to help cruisers on every popular cruise destination in the world. Baltic Route – Canary Islands Cruise – New England Cruise – Caribbean Cruise (from Barbados) – Norwegian Fjords – Mediterranean Routes

If you are new to Doris Visits Cruise TV then welcome, we invite you to comment at the end of our blogs, and ask you for follow us on here on www.DorisVisits.com and like us on Facebook and follow us on Twitter and subscribe to our YouTube Channel to get the best from us. We are always looking for presenters and social media activists to help us expand so drop us a line anytime with ideas at [email protected]  PLEASE SHARE