OK film buffs, this is where they made Shirley Valentine and you can sense it as soon as you see the colourful harbour from the ship. When in town you may get to see the rich and famous who love it here. Mykonos is another easy port on this Greek cruise route. According to Greek mythology, it was formed from the bodies of giants killed by Hercules, so if you are feeling strong you might walk round the bay to the old town. Tourlos is the new cruise port and is about 30 minutes walk from the town but the roads do not have the same safe pavements as the UK, but if you do you will pass the Archaeological museum about half way round a block in from the coast. There is another such museum at the back of the town. You will find exhibits from the Hellenistic period and prehistoric times including vessels, statues and columns. (see map of museums). The public bus goes from here to the North Bus station. The shuttle bus is about 8 euros and there is also a ferry boat bus which is about 5 euros, sharing a taxi might be cheaper. It is a special island, and one of the most popular in the Aegean. If you want to venture out you may be able to plan the excursion by local bus from one of the towns two bus stations. 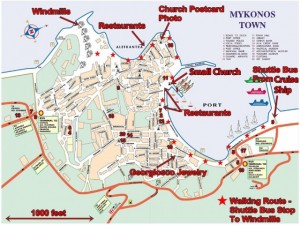 If you have not been here before, you will probably take in the picture postcard beauty of the old town with lanes, churches, and lively bars, cafes and restaurants. Landmarks include the Three Wells, the Paraportiani Church, the picturesque Alefkandra area also known as ‘Little Venice’, with medieval colourful houses by the clear blue sea. Relax on one of the incredible beaches; Kalafati Beach is popular with its golden white sand, Platis Gialos beach is too, with a length of golden sand on the south coast of the island. There is a maritime museum, a windmill museum, and a folklore museum.

If you have seen the town and harbour before, take a tour or hire a car and visit the villages like Ano Mera and coastal resorts like Kalo Livadi and Ornos.

Marella tours include – Panoramic and Wine – This one offers up two of the things Mykonos is best at – standout scenery and good wine. Your first stop is a viewpoint in Aghios Stefanos, where you’ll look out over Mykonos port and the town, and have the opportunity to take some photos. Next up, you’ll head for Agios Ioannis. The beach here had a starring role in the Shirley Valentine movie, so its sands are among the most famous on the island. Next on the agenda is the island’s sleepy capital, Ano Mera. Grab a bite to eat in one of the tavernas, browse the shops for souvenirs, or pay a visit to the Monastery of Panagia Tourliani, where highlights include a time-worn bell tower and an impressive marble fountain. Finally, you’ll arrive at the Winery of Assimomitis. Here, you’ll get to grips with the wine-making process, and enjoy classical music as you relax overlooking the vineyards. Afterwards, there’s time to sample the wine for yourself – white, red and sweet wine are all on the agenda. Plus, you’ll get some Greek nibbles to accompany the wine.

PRINCESS CRUISES – CRUISES IN THE MEDITERRANEAN

Our film is to follow, we are currently at sea on the Oceana.

Third Party Tours Available include, these might save you money:-