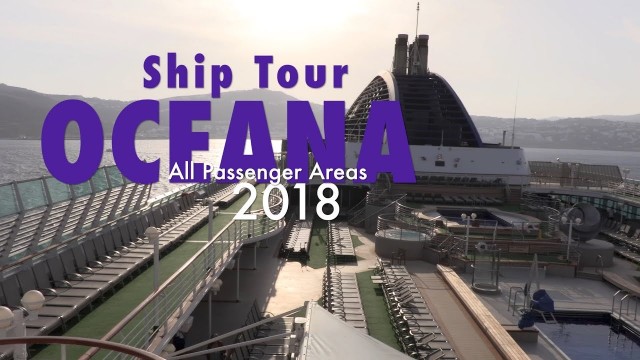 The video is of the ship’s new look, please hit the share button. It was the first ship in history to have a double ship naming ceremony. Originally with Carnival’s Princess fleet as the Ocean Princess in 2000, her godmothers are Ali McGraw and Ryan O Neal. The Oceana was renamed in 2003 by Princess Anne and her daughter Zara Phillips, now her godmothers. This ship has a very loyal following and a busy chat site. Originally built at Fincanteri shipyard the Oceana is a family friendly ship with a welcoming informal atmosphere, she has now had a facelift. P&O Cruises senior vice president, Paul Ludlow, commented “Those travelling on Arcadia and Oceana can look forward to new design concepts and improvements to comfort while still enjoying the incomparable service that characterises a P&O Cruises holiday.”
DORIS VISITS WESTERN MEDITERRANEAN MENU OF PORT GUIDES
The ship has been freshened up in what has been said to be a £31m refit program at the Blohm and Voss shipyard in Hamburg for it and a similar job on the Arcadia. The ship structure is unchanged, it is 261 m long with a guest 2,016 to 2,272 maximum (if everyone uses the 3rd and 4th person deal), the Oceana has a crew of about 900.
TWO GREAT CRUISE DEALS SPECIFIC TO THE P&O CRUISE SHIP OCEANA – CLICK HERE

RPW design oversaw the refurbishment that included carpeting throughout the ship in both public areas and cabins. Furnishings were replaced in the atrium, the Explorers, Magnums, Winners’, Yacht and Compass bars, The Plaza restaurant and in cabins. The outdoor areas were refurbished, with furnishings, artificial turf, tiling and the canopy covering the Terrace Bar and Pool being replaced. Additionally, the future cruise sales desk was relocated to near the photo gallery. The Atrium now feels more space free and has real foliage.

You can see the buffet here, and the cabin tour here.

We have guides of Athens, Malta, Crete and othersDORIS VISITS EASTERN MEDITERRANEAN MENU OF PORT GUIDES

Café Jardin is still an Italian restaurant and is not a Glass House, despite rumours.