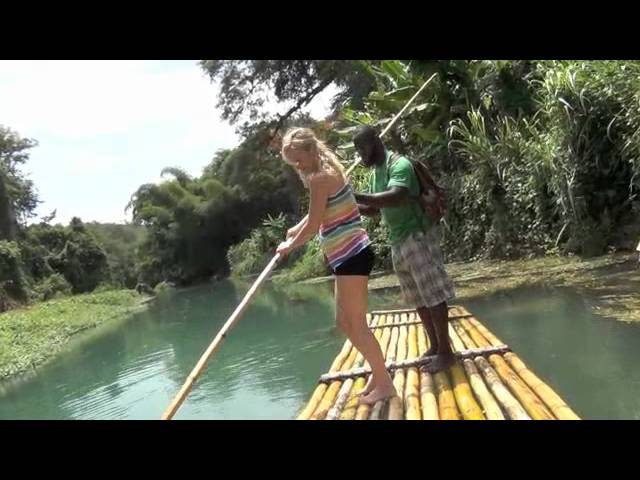 We have actually stayed in Jamaica twice. Once in what was then a very quaint and lovely Couples Hotel, that reeked of old film stars and people singing round the piano. There were pictures of movie stars everywhere and you could imagine you were standing where Errol Flynn or Noel Coward stood. It had double hammocks in secluded tree oasis and was idylic. The second time was at Sandals, a much noisier affair where shorts at dinner was just fine. The golf there was fantastic and although we had not been playing long our compulsory cadey was one of the best teachers we have ever had. It was a special wedding anniversary and we had just been in South Africa where we were disappointed with the designs and styles of the gem jewellery, and had also been through Dubai where we though the same. It was here that Jean got her chocolate diamond necklace if you ever notice it. So, we thought we would share this video of another gem in Jamaica, the Martha Brae River. Jamaica is a place everyone should visit, and also do the Bob Marley Tour.

The Caribbean is often a first choice for new cruises, so you have come to the right place to look around for here and cruise stops all over the world. It is not just about us familiarising you with the destination first, but connecting you to others for you are all the knowledge base that helps others decide walk or tour, beach or bar, shopping or diving. See our blog on choosing a first cruise. CHOOSING A FIRST CRUISE.Click here for the special CARIBBEAN SEASON destination menu. Each major Island and Caribbean Season Destination has a guide or film about the tours here !

CHAT GROUP – Cruise the Caribbean Chat – If you love the Caribbean then share here. Chat and answer other people’s questions. Here is where you are the knowledge base – CLICK HERE TO SHARE & CHAT