Whilst in her second home, the Brooklyn Cruise Port New York, The Queen Victoria hosted the star studded red carpet premiere of The Greatest Showman back in 2017. Our exec producer Stuart St Paul is a voting member in the directors chapel, and gets invited to many of these events just before and after Christmas. Which ship will be used this year? The madness has already started again (August 2018). It’s not because it is the festive season, it’s because the film awards start their rounds of voting, and wish to ensure that every voting member has seen the film and is encouraged to vote. Lobbying at it’s finest, and special screens are sought in the best places. Please vote, please vote!! The Queen Victoria welcomed stars Hugh Jackman, Zendaya, Zac Efron and, Rebecca Ferguson walking the red carpet in anticipation of the unique world-first award screening on a ship back in 2017. The music and the film have become enourmous and may soon become a guest workshop on the Britannia. 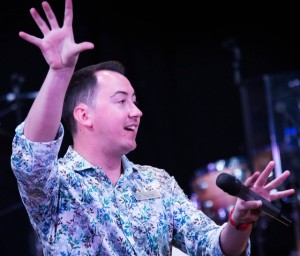 Musicals are the backbone of theatre on board ship. Adam Allinson who is a theatrical producer, and a showman himself on the Britannia, runs workshops on Les Miserables on board the Britannia. He is soon to start working with guests on The Greatest Showman, the music of which is always on in the office when Jean Heard comes in to do voice overs or write.

Click Adam’s picture to go to his page here on Doris Visits. Interested in musicals, want to do a workshop. They normally run either a Les Mis or The Greatest Showman guest workshop on the Britannia. To see when you might join, click the brochure box. The movie, The Greatest Showman is a bold and original musical that celebrates the birth of show business and the sense of wonder we feel when dreams come to life. A story of a visionary who rose from nothing to create a mesmerising spectacle that became a worldwide sensation, inspired by the great showman P.T. Barnum who sailed multiple times on various Cunard ships to cross the Atlantic between New York and England. His most notable voyage was in 1850, when he invited legendary opera singer Jenny Lind (the Swedish Nightingale) to join him in America as part of his show. They sailed into New York on Cunard’s Cambria with almost 40,000 fans greeting them at the docks.

The Greatest Showman is directed by exciting new filmmaker, Michael Gracey, with songs by Academy Award winners Benj Pasek and Justin Paul (La La Land). It stars Academy Award nominees Hugh Jackman and Michelle Williams, joined by Zendaya, Zac Efron, and Rebecca Ferguson. The Greatest Showman hits US theaters on 20th December 2017 and cinemas in the UK on 5th January 2018 to get in the end of the year and comply with the current years voting.

JOIN THE NEW CUNARD CRUISE CHAT GROUP ON FACEBOOK Guests watched as stars trod the red carpet, but that is not unusual on the Cunard ships. Francis Ford Coppola and Ed Sheeran recently sailed on this ship to work on their craft while at sea. Past luminaries have included David Bowie who hated flying, Elizabeth Taylor, Rita Hayworth, Wes Anderson and Tilda Swinton. Sting performed songs in Queen Mary 2’s Royal Court Theatre, Carly Simon filmed her Moonlight Serenade DVD on board.

See all our films on the New York Bus Tours and much more, as well as, the New England Cruise stops. Going to New York, see our film on the Brooklyn Cruise Terminal.CHAT GROUP – Cruise Canada & the USA Chat – New Group, be one of the first to join and start a thread on your forthcoming or past cruise by number – CLICK HERE TO SHARE & CHAT

Cruise Crime Thrillers - Just like a cruise that you were never on...

Cruise Deals, Parking Deals and many more ways to save, especially when we find a way to get to the beach for $2.
We use cookies to ensure that we give you the best experience on our website. If you continue to use this site we will assume that you are happy with it.Ok