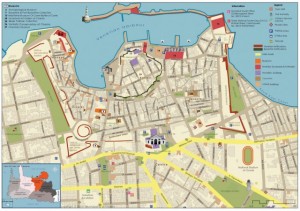 Crete has a good public bus service. The PORT bus stop is about 50 meters from where you dock, the fare is about 3.40 Euros return and takes ten minutes to Chania. The buses are frequent and can be one every five minutes. Chania bus service can be researched here but there is no need, it is in the port, straight to town. But if you want to venture further afield, to find the bus station in Chania walk to the top of Halidon Street, across the square and turn right – it’s about a hundred metres on the left. To see the harbour, just follow the old town signs.

It could be considered a crime to head straight for the beautiful blue flag beaches because the old town is said to be the prettiest in Greece. However, a couple of hours relaxing might fit in nicely and there will be time. You can walk around from the harbour to Nea Chora which is a fantastic beach with bars and dining. See our film for the seafood plater! Buses can take you to more beaches if you are adventurous. But, the Old Town and Chania’s Venetian Harbour, built in the 14th century must not be missed. This is a cosmopolitan place where most of what you will want to see are clustered close to the harbour – cobbled streets, old buildings, museums, churches, pastry shops offering wonderful cafes, restaurants, tavernas serving local wines and bourkei pastries and Cretan pilaf. Rushing back to the buffet for lunch may not happen! The atmosphere here in the harbour and narrow alleyways is unique and up there with Venice and Florence.

Architectural influences from history, Greece, Rome and Turkey with museums, art and people; every time you stop it is a photograph. If you have been here many times you may venture out; Chania is surrounded by numerous rich options for sightseeing, exploration and discovery. Mountain villages provide a view into the “inner Crete”. The Samaria and many other gorges can be hiked, archaeological sites abound, but these may be tours.

Sadly the War Museum of Chania has been closed. The cemetery is the first stop of the Hop ON Hop Of bus, and very near the ship. See our separate film for this.

In the movie, For Your Eye’s Only (which would have been my first Bond movie had a union hiccup delayed me joining the team to Octopussy) Roger Moore’s high-speed boat chase was filmed in the Bay.

Ship Tours may well include:-