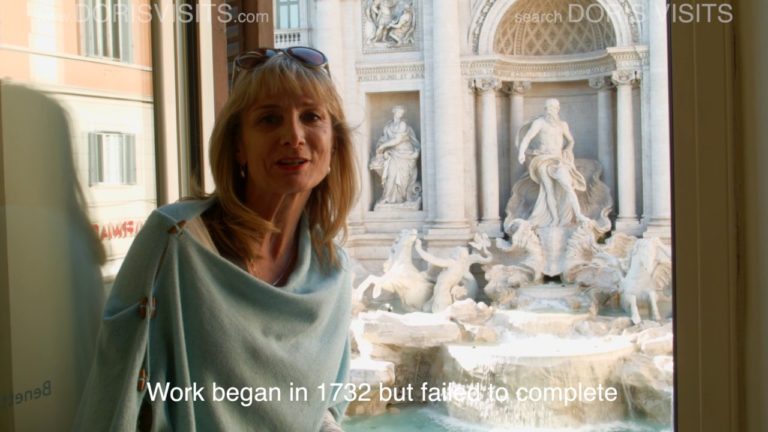 Visiting the Trevi Fountain can be like going to a rock concert. People cram and push to get to the front, to get that great photo opportunity and when they get to the front their lens is not wide enough. It is a mess, so here is our tip, go into the clothes shop on the other side of the road, and upstairs in the children department is a window that gives the best photo spot. You can thank our cameraman for that one! On the opposite corner to the Trevi Fountain is the ice cream shop where you can Pimp Your Magnum. Just saying, the cameraman found that too!

In 1629 Pope Urban VIII found the fountain at the junction of three major roads inadequate and asked for designs in competition. The Trevi Fountain was designed by the winner, Italian architect Nicola Salvi who failed to complete so it was completed by Pietro Bracci. It is 26.3 metres (86 ft) high and 49.15 metres (161.3 ft) wide, which is why you need to get back or have a wide lens. One of the most famous fountains in the world, it is the largest Baroque fountain in the city and is called the Trevi fountain because it is in the Trevi district. MOVIE TIME – The fountain has appeared in several notable films, which means this makes our Cruise Destination where Movies were made list:-

The Spanish Steps are 135 steps that stretch between between the Piazza di Spagna at the base and Piazza Trinità dei Monti, dominated by the Trinità dei Monti church at the top. Another design competition held in 1717. Funded by a Frenchman, French diplomat Étienne Gueffier, and in Italy, they are a set of steps, that may be Spanish, but again are famous in films and songs.

CHAT GROUP – Any Bob Dylan fans sat on the steps and sung? Cruise the Mediterranean Chat – New Group, be one of the first to join and start a thread on your forthcoming or past cruise by number – – CLICK HERE TO SHARE & CHATGAME OF THRONES TAKE ON DUBROVNIK

Let the bus take the strain – book online before you go

While on YouTube please also subscribe to Doris Visits.CHAT GROUP – Cruise the Mediterranean Chat – New Group, be one of the first to join and start a thread on your forthcoming or past cruise by number – – CLICK HERE TO SHARE & CHAT