If you are visiting Dover on a cruise ship, and want to see a quintessentially British seaside resort, Broadstairs is a prime example. Originally a little fishing village known as Bradstowe, it is just 20 miles, 34 minutes from Dover, on the Isle of Thanet in the Thanet district of east Kent. It is also close to Canterbury Cathedral, and just 60 miles from the M25 and 80 miles east of London so quite a weekend away, or an extra couple of days can be added to a cruise from Dover. It is not an option from Southampton as the journey is around 3 hours.

Dover offers the Castle, Port Lympne Safari Park with overnight lodges in with the animals, but Broadstairs, situated between Margate and Ramsgate is referred to as the Jewel of Thanet and offers a taste of Britain not easy to find anywhere. Broadstairs is a collection of seven bays; Botany Bay, Kingsgate Bay, Joss Bay, Stone Bay, Viking Bay, Louisa Bay and Dumpton Bay. Botany Bay and Joss Bay were awarded the Blue flag rural beach award in 2005. Viking Bay, the main beach in Broadstairs, won the Blue Flag in 2006. The sand in Viking Bay stands up against any beach in the world, and to the North is Stone Bay and Louisa Bay to the south on the Broadstairs undercliff walking trail which goes down as far as the beach at Dumpton Gap.

The village of St Peter’s was established in around 1075 and the parish church was completed around 1080. 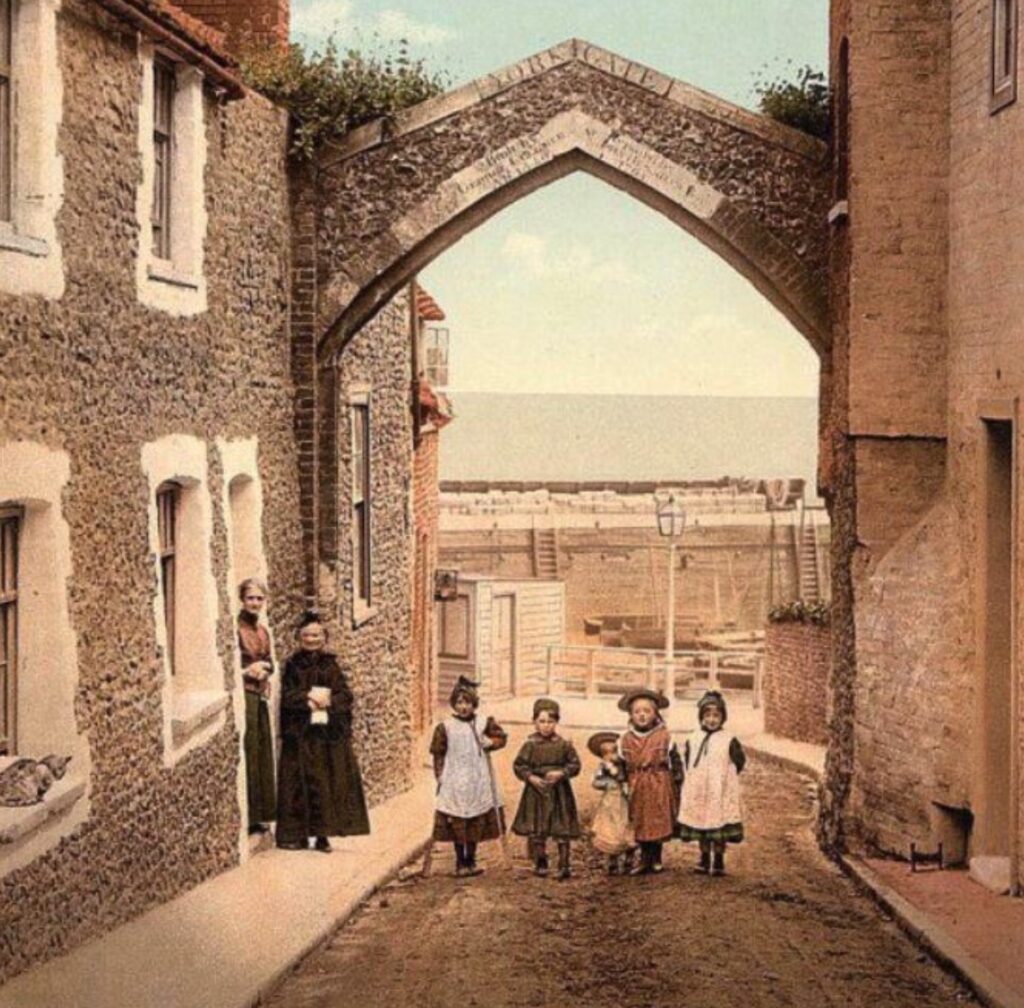 On the road down to the sea, Harbour Road, which it will be hard not to walk, sits one of the smallest prettiest cinemas. Above it is York Gate, originally built in 1440 by George Culmer. It was then a track leading down to the sea, where the first wooden pier or jetty was built in 1460. The Culmers were local landowners who were key in the development of Broadstairs. The Culmers’ Allotments, up from York Gate, were bestowed to the poor of the parish to grow food back in the 1700s. The gate was fortified with a portcullis to protect the village from pirates and in 1538 when the road was cut into the chalk a substantial gate and arch replaced the original. It was, therefore, subject to many modifications and repairs but it was a major repair in 1795 by Sir John Henniker Bart that lead to this version being set on the 17th July 1811.

Around the third week in June, the town hosts the Broadstairs Dickens Festival which includes a production of one of the author’s pieces. All around the town people will be seen wearing Victorian dress. The first festival was in 1937 when Gladys Waterer, the then resident of Dickens House (now a museum but closed for the pandemic period) conceived the idea. The first festival was a production of David Copperfield, a novel written in the town and in the house on the clifftop overlooking Viking Bay, Bleak House, as Jean explains in the film.

There is a folk festival in the second week in August as a grand firework display in the bay on the 5th of November. There is normally a firework display every Wednesday evening during the summer season.

Near to the railway station is Crampton Tower museum which has seven working model railways in gauges N, OO, O and Gauge One. Thomas Russell Crampton was an engineer trained at Brunel’s Great Western Railway and designed the Crampton Locomotive. The museum features his drawings, as well as models, graphics, patents, awards and the original Broadstairs stagecoach (1860).

Broadstairs also has the office of SAGA insurance. SAGA main offices are in Folkstone.

This video sits in the blogs for Dover at CRUISE DORIS VISITS in the English ports. Around 1000 world cruise ports are examined and over 300 cruise ships @ www.dorisvisits.com

CHAT GROUPS – a fantastic way to help others and a place to find answers. We run Facebook Groups for cruisers – see the list in black boxes after the ships and fleets listed above. Here are our cruise chat groups

QUEEN ANNE, in bits at half launch