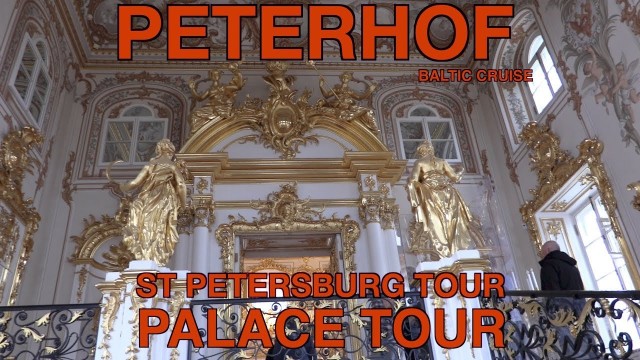 Peterhof means “Peter’s Court” in German. Their royal family, like ours, was infused with Germans. Peterhof Palace

One of St. Petersburg’s most famous and popular visitor attractions, the Peterhof Palace is many cruisers first choice, and with the ship tour you are taken there and back and no visa is required. Please note that wheelchair access can be non existent, and more than often wheelchair guests are taken into a room and shown a film that they will not have time to complete because their group is marched through so quickly. Bags are not allowed in, you take your coats off and cover your shoes. Good luck with resisting.

Peter the Great desired an imperial palace and at his second attempt he managed to build it at Strelna, Peterhof. Then a modest building compared with the one you see now, which was created by his daughter, Empress Elizabeth. She ordered the expansion of the Grand Palace and greatly extended the park and the famous system of fountains, including the spectacular Grand Cascade. Her desires did not stop there, she had over 1500 gowns and your guide will have many more stories. Catherine the Great also made improvements during the 18th & 19th centuries before moving the court to Pushkin. Peterhof once again became the Imperial Residence during the reign of Nicholas I.

Peterhof was ravaged by German troops during the Second World War. The destruction, and the pictures of the the renovation are quite remarkable. The work was done by military engineers and over 1,000 volunteers. The Lower Park opened to the public in 1945 and the facades of the Grand Palace were restored in 1952. The name was also de-Germanicized in 1944, becoming Petrodvorets, the name under which the surrounding town is still known. The palace and park are once again known as Peterhof.