The Roman Ruins of Jerash north of Amman, Jordan 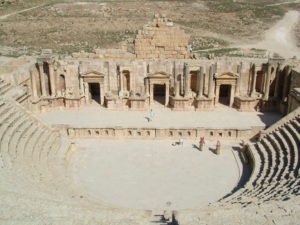 Antioch. Named after the God Of Antiquities, Gerasa.

I have always wanted to play a big stage in an old theatre and the trip was worth it. Jerash is 48 km north of Amman, the capital of Jordan as you head up towards Syria. Named after the God Of Antiquities, Gerasa, the Greco-Roman city is also referred to as Antioch, on the golden river. The city was founded by Alexandra the Great around 331BC when Alexandra left Egypt and crossed Syria. 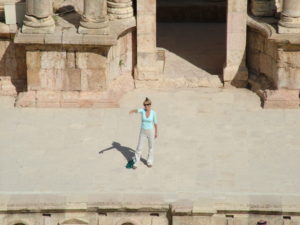 Yes, that is I on the stage. I could not resist it. On the stage in one of the most important and best preserved Roman cities in the near east.

Excavations show inhabitants go as far back as the bronze age, 1200BC. It was the birthplace of the mathematician Nicomechus of Gerasa (c.60-120 AD). 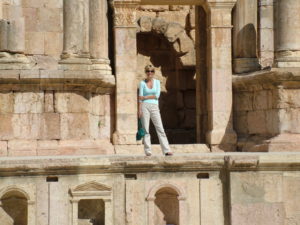 It may have been the sheer size of the settlement that helped the Romans ensure security and peace in this area. This enabled its people to devote their efforts and time to economic development and encouraged civic building activity and the results are plain to see. This is a city, a city where you can feel people lived, traded and then played. It is enormous and walking round should not be rushed. 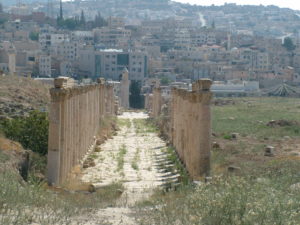 The Empreror Trajan constructed roads to it throughout the province entering its importance, and the Emperor Hadrian visited there in AD 129 -130. Doris Visited there in 2009 and whilst others could not hear the trumpeters, I could!

There is something about scale, something huge churches and stadiums encourage, but it is that awesomeness that sets the imagination going to invent a version of what must have happened there. My twisted mind kept seeing the Monty Python team running around trying to buy columns and sell blessings, but whatever, this is one of the world’s most magical places. 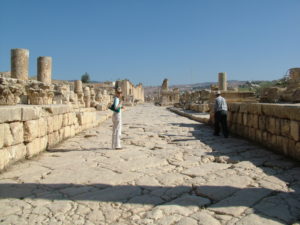 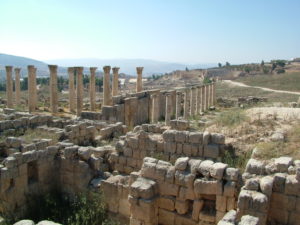 Let me just say that it is possible to get here and back to Aqaba if docked there, but it is a risk and a rush, so an excursion that the ship would wait to return is advised if there is one. However I doubt there will be unless you get an overnight because who would drive past Petra and that is a day out. This just shows that Jordan’s so much to offer a stay here has to be planned.

I have mislaid my pictures of the Wadi Rum, but either watch Laurence of Arabia or the film some of our team made there (which I missed) A Passion in the Desert. 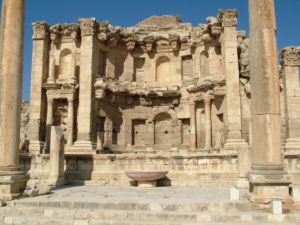 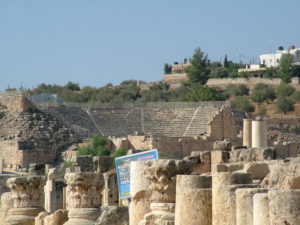 If you have never cruised, and we are mainly a cruise site, then click here to see how to look at what cruising is. Doris Visits allows you to SEE THE CRUISE BEFORE YOU CRUISE THE SEA. Sadly, Jerash is a little too far from the port.

A number of ships are now basing themselves in Dubai and offering cruises locally or back and forth through the Suez Canal now it has been expanded and is open for big business. Fly cruises and cruises. The Arcadia is going there.