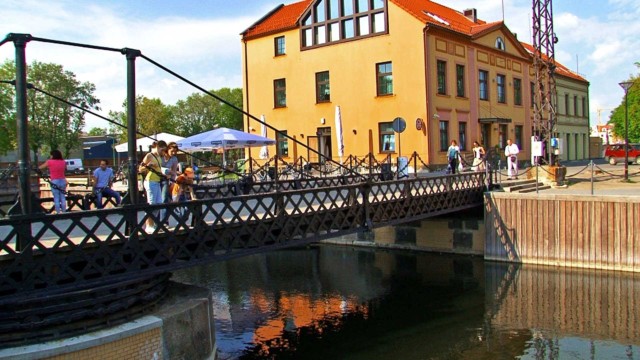 Pronounced Clay-peda, Klaipeda is an unusually ice free port situated at the edge of the Baltic Sea and the Curonian Lagoon in Lithuania. Baltic tribes have inhabited the area since the 7th century which more recently has been controlled by successive German states until the 1919 Treaty of Versailles. In 1923 the Klaipėda Revolt saw it added to Lithuania (apart from a brief WWII, 1939 and 1945 return to Germany). The bays, beaches, sand dunes, seaside shops and shipyards between the nearby seaside towns of Nida to the south and Palanga to the north maybe tempting, but the picturesque half-timbered buildings similar to those found in Germany and Denmark with antique lampposts appear on every corner are likely to keep you exploring the town. Away from the among stone-paved sidewalks and hidden courtyards you’ll find the remains of the 13th century Teutonic Knight’s Memelberg Castle and the maritime museum in Fort Wilhelm, built at the end of the 19th century. Teatro Square is named after the ornate Neoclassical theatre building on its northern side. This restored old town is a favourite with Baltic cruises.

CLICK HERE for our BALTIC CRUISE destinations menu – All parts and tours together, then a choice of every Baltic port in its own menu. CLICK HERECHAT GROUP – Cruise the Baltic Chat – start a thread on your forthcoming or past cruise by number – CLICK HERE TO SHARE & CHAT

There is so much to see here you might take a ship tour like the Charms of Franciscan Kretinga, north from Klaipeda. The Franciscan Monastery combines renaissance and baroque elements and the neighbouring Church of the Annunciation dating from the 17th century has much to see. Or if you have energy to spare you can cycle to the end of the Dunes. If you have booked your P&O cruise and have your details, log in here to your planner and look at the tours. Or there is the Klaipeda and Amber Factory. You will note from our Jurassic Park tour of Amber Cove town Puerto Plata where, they claim the DNA of life itself is captured in amber. (That is another story but worth a visit later)

Klaipeda is a great Baltic destination that it is easy to return to many times and discover more and more to do.  GUIDES FOR ALL THE BALTIC DESTINATION GUIDES Take a look around Doris Visits and get more out of your cruise research – guides, tours, cabin tours, ship tours, news. AARHUS  COPENHAGEN FREDERICIA GDANSK GOTHENBURG HELSINGBORG HELSINKI KALUNDBORG KIELE KLAIPEDA MALMO OSLO RIGA SKAGEN ST PETERSBURG STOCKHOLM TALLINN TRAVEMUNDE VISBY WARNEMUNDE WARNEMUNDE

Disaster in the Baltic ! Violet was a passenger and has now found work on the ship in marketing and as an older model. A shock lease of life at her age. The novel that takes place on a Baltic Cruise, life isn’t that easy! Action romance on a cruise with adult themes.Follow author Sally Katz by clicking her name and then on the author page on Amazon, click follow. Then as she releases a new book your are informed.