A new large sea lock is being constructed at the entrance of the North Sea Canal at IJmuiden. It will be the world’s largest sea lock and allow cruise ships as large as 365m into the city of Amsterdam.The lock gates were made in South Korea, and have been shipped to Holland. The new lock will be 500 metres long, 70 metres wide and 18 metres deep, making it the world’s largest sea lock. Construction began in January 2016 and the new lock will be available for shipping early 2022. From then on, Port of Amsterdam will be accessible 24 hours a day. The construction can be seen as you sail through the old existing lock.

But does Amsterdam want the huge ships? Are they having a rethink about having the largest ships park next to its central station? Ship guests pour off in their thousands and rarely contribute to the local economy. At best most buy a coffee, but not even a snack when the ship is that close and the food is free. Many cities have been threatening, but Amsterdam has implemented, a bedroom tax like hotels have to pay. Because the ship has brought their bedrooms into the city! From the start of 2019 Amsterdam has charged an €8 per person for visitors staying 24 hours or less, which is every cruise passenger on the ship. Many places are under pressure to do the same so this could start a domino effect. The cruise lines, Cruise and Maritime Voyages (CMV) and MSC Cruises, have already found alternative ports, normally Rotterdam.

CMV’s CEO Christian Verhounig said in a statement: “Stringent cost controls and long-term planning are key components in achieving the required CMV pricing model. The late introduction of these new and un-phased charges are therefore not budgeted and simply cannot be absorbed.”

So, as the huge new lock is errected, what is it there to do. Increase footfall in the city or not? 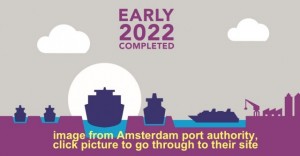 For many sailing through locks and canals is exciting. Panama is a long way away, but Amsterdam is very near. It is the same experience; huge ship in a lock. See our film of the lock operation.

There is a wall or Dyke round the Amsterdam area because it is reclaimed land and below sea level. So, the ship goes into a lock and is lowered. It then can go into the huge shipping canals of land with a huge seafaring history. The Dutch, like the British took many islands from the natives, Sint Maarten is the one many of you will have been to. The lock is inside the circular A10 road which is a tunnel. There are a number of road and rail tunnel crossings.

The lock is in IJmuiden – map below – previously a farming and fishing community, the lock and shipping industry has given the area work, though it was devastated by the floods of 1916. The whole shipping area is a feat of engineering, though the lock is simple and less impressive than the one in Panama.

There are a huge number of industries in this system, including Tata Steel, and a number of canals. Visit Holland and Wikipedia both list them as such. Here are the links with further information. The North Sea Canal is closed off in the bay but there is a connection to the Amsterdam Rhine Canal.