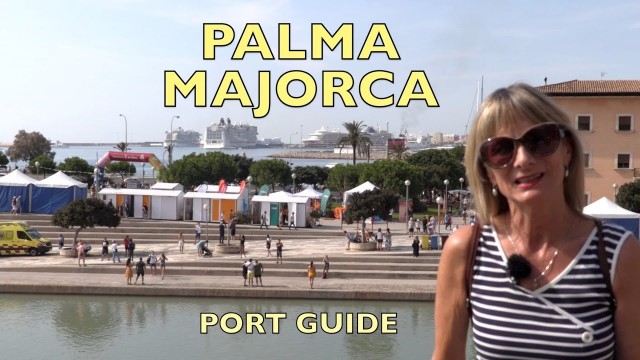 Palma is the capital of the largest Balearic Island Majorca. Palma is a swinging port, a huge Parc del Mar at the foot of the Cathedral and Palace where throughout the summer there will be games and activities. It is not unusual to see the largest Zumba class ever seen which appears to go on all day. And if you hear screams every now and again it will be a martial arts display somewhere. The cruise shuttle drops you off on the sea front and you will need to cross the park to the get to the Cathedral For those of you that are not church lovers, the Cathedral has a film of its own in the Palma section here on Doris Visits as does the Almudaina Palace. The Palace and Cathedral both have very small entrance fees and concessions if you carry proof but they are so cheap the full price won’t hurt. MARELLA EAST MED CRUISE P&O MEDITERRANEAN CRUISE SAGA new ships in the MED

Unless you are on a tour, or take a bus or taxi you are unlikely to get up to the number three attraction, the round Bellver Castle. We show it dominating the fir tree forest in the sky line up above the port. The Arab Baths have little to see but are well worth the effort of finding, up through the medieval gate and turn right.

As a Spanish Island it offers tall hotels one minute and quiet sandy bays the next, night clubs and classy bars; food and wine are along with the great hospitality very warming. The Whole port is easy to walk round, but the walk from ship to town is long, don’t under estimate it. However, shuttle bus queues are long as guests getting onto the two story buses can take time. Those who are adventurous, at the port gate you can hire a normal or electric bicycle. Take a padlock. As always, it is a big city, with crime prevention cameras everywhere which tells you that if you don’t need to carry a bag or wear Jewellery, then don’t.Find your ship’s chat site + share your pictures + experiences to help others     There are many churches, a small museum, but the alleyways, streets and cafes are full of character too.

Throughout history the island’s strategic position has made it important. Today is no different as ships gather in number. It has a large harbour, and amongst the many ships that berth there, we have the following in on our day. Marella Explorer, P&O Ventura, Regent Seven Seas Voyager, Aida Prima and NCL Epic. FRED OLSEN GREEK CRUISE

Brief history is similar to the area, Phoenicians, then Romans and Byzantine empires changed hands until the Moors invaded in 902. James the 1stof Aragon took it in the 13thCentury, then apart from the odd ravaging by pirates the island was independent kingdom for a short time. In 1342 they came under Spanish rule until the War of Succession in 1704. Brtian ruled for most of that century . Under the treaty of Amiens (1802 the year our movie the Scarlet Tunic was set in) the island was returned to Spain.