Are your diamonds real? Unlikely. Let’s explore the truth as we discover Sierra Leone. On the west coast of Africa, heading down from the Gambia and before you reach Ghana, and long before South Africa is Sierra Leone. Said to be Africa’s undiscovered gem, it is found on a World Cruise or African Wildlife and Cultural Cruises… and is now set to become more popular as cruisers get more inquisitive about the world.

Tokeh Town has a fantastic large sandy beach for those not wishing to visit the hustle and bustle. Specialist cruises like the Crystal Enevour list this stop which is about 20 miles south of Freetown. Freetown commemorates the return from the slave trade and has a cotton tree and other markers of note. The nearby Bunce Island was a leaving place for slaves being sold to the Americas.

Tokeh island is uninhabited and a short ride from the beach.

Founded by Sherbro fisherman and named Pa Baw in the colonial era, the trades are now fishing and tourism. The people are said to be the nicest in the world. Tokeh Village started to get recognition when an Australian businessman associated with mining, opened a luxurious 5-star beach resort called The Place in 2013.

In the past, Sierra Leone had poor publicity for conflict or blood diamonds. So-called artisanal miners (freelancers refusing to work for mines owned by big businesses) make a living from searching for diamonds—either legally or illegally, however, these are normally small. Over the years the mining of these diamonds is said to have funded the bloody civil war (1991-2001), which is estimated to have killed over 120,000 people (country population 6million). Perpetrators were prosecuted at the Hague for war crimes.

Not all uncut diamonds are bad. The 709 carrot Peace Diamond was discovered by a Christian pastor in the eastern Kono District. Sold for $6.5m he claimed the proceeds will go to benefit the development of Sierra Leone. 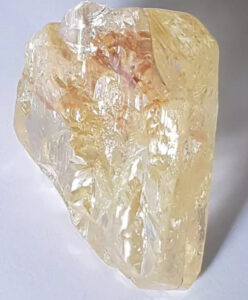 It was the second-largest to ever be discovered in the West African country, behind only the Star of Sierra Leone, which was found in 1972 and weighed 969 carats.

Tourism is important and ships would not stop there if it was neither special nor safe. Be prepared for the stop itself being a little gem.

I (Stuart) discovered all this when researching blood diamonds for my novel of the same name, to be released in late 2012. Blood Diamonds is my first full-on action crime mystery and a romance that you will not be expecting. Blood Diamonds sees the end of CSCI and the start of the shorter name for the agency, CCI CRUISE CRIME INVESTIGATORS. For those following the cruise novels, expect change.

The largest diamond ever found was the Cullinan Diamond, discovered in South Africa in 1905; 3,107 carats. The largest cut is part of the UK crown jewels. Now synthetic diamonds have been accepted as diamonds the industry is in a little turmoil. Lab-grown diamonds test positive on a diamond tester because they’re made of crystallized carbon. The GIA has been grading laboratory-grown diamonds since 2007 and since 2019 they have dropped the term synthetic. The only difference between lab-grown diamonds and mined diamonds is their origin. The diamond trade is an 81 billion dollars industry. When they say 65% of mined diamonds coming from Africa, that is of mined diamonds.

The diamonds you have may well have been lab-grown!

All these books are from the author of this blog, Stuart St Paul. He is a contributor and chat group moderator to the 43 Doris Visits ship chat sites. See his Doris Visits page. His Emmerdale fan page.