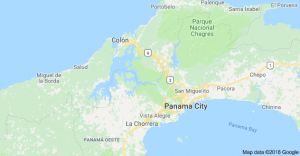 The port of Cristobal, Colón is the Caribbean port nearest to the eastern entrance of the Panama Canal. It is on the north coast of Panama and about 50 miles from Panama City, which sits in Panama Bay on the Pacific coast. Colón and Panama City are the two ends of the route that includes the Panama Canal. There are partial transits, lake trips and full transits. Cruisers might consider the excursions here.

If you want to visit Panama City there is the canal transit or a train which takes 30 minutes. The Panama Railroad, from Colón was built in to provide a fast route to California and the gold rush. The drive is a straight road running more or less alongside the canal. Amusingly, buses here sometimes charge by the hour, because if you are stuck in traffic it costs them, you pay. Doris Visits traveled through the canal on the Black Watch and our footage sits on old digital tape formats in a box somewhere. Our Panama Canal transit page on the canal has a good guest film.

The town of Colón was originally called Aspinwall – after the man behind the railroad, William Aspinwall – but the local Hispanic population called it Colón after Christopher Columbus was built in 1850. If you arrive on a Sunday, much will be closed. Just inland, and outside Colón are the canal’s impressive Gatún Locks where you rise about 30ft, and the Gatún Dam. About half an hour away is the Fort San Lorenzo; it’s a well-preserved reminder of when this area was at the heart of the Spanish Main. Colón underwent a major redevelopment in the millennium and whilst some suggest it is fast becoming Central America’s hottest destination, due to Colón’s duty-free trade zone, the largest in the Western Hemisphere, others claim it has done little to lift the town’s fortunes. That is because there are almost two versions of Colón; one rotting, while the other tries to copy the capital Panama City which is in itself trying to become the new Dubai. Colón is wedged between a busy port and a handsome cruise ship terminal. It can a good place to shop for Asian goods, or base from which to explore the rest of Panama. But the city is one of stark contrasts where the theaters, clubs, restaurants and finely manicured boulevards that blossomed during the construction of the canal in the early 1900s, are far more faded than the fame Cuba once held, history has sadly never been seen as part of the cities continued attempt at wealth or even survival. Colón, Panama’s second-largest city, was recently a location stand-in for Haiti in a movie, so it doubled for the poorest country in the hemisphere.

However, into the dense jungle you can find the Choco Indians, living as they have done for centuries, in houses built on stilts along the banks of the Charges River. They offer a version of their mystical rituals, and share knowledge of medicinal plants and natural remedies with tourists.Or you can also visit its largest indigenous group, the Kunas, who own and inhabit one of Panama’s major tourist attractions, the San Blas Islands. We suggest sticking with organised tours, Colón is not know for being a food capital or the world or, surprisingly an easy place to find fruit. Much of the city is in need of maintenance and a make over. Most of Panama is very safe during the day and an entry level tourist place for exploring South America. People in rural areas are generally extremely friendly and very helpful. The border region between Panama and Colombia has a different tone! Colon can be dangerous so walking alone and taking side streets is unwise. Some neighbourhoods in Panama City can be dangerous. El Chorrillo, Curundu and El Marañón, are poor and crime-ridden areas. The old colonial quarter, Casco Viejo (also called San Felipe) has a bad reputation at night though the main areas bars and restaurants are considered safe. Caution is advised going down the Avenida Central towards El Chorillo.

Finding a good modern film is not easy, maybe you can help us out here, but this is a good coverage of life in the province.