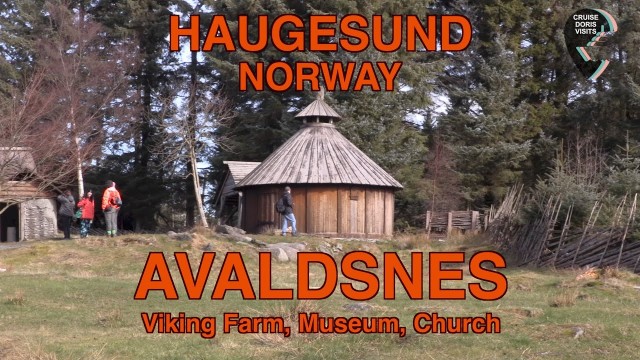 Avaldsnes is Norway’s oldest royal seat. Back in the time when every area had a King, and they fought and married to combine areas.

This trip to Avaldsnes is the main trip for Haugesund, and most coach trips will feature it. You can easily get there on the public bus 209 or 210 from the main street. Avaldsnes is said to be the oldest royal seat of the Vikings and was the home of Norwegian kings for 500 years, starting with Harald Haarfagre (Fair Hair) in 872. There is little or nothing to see of that now other than is being revealed in excavations and put into the museum. This work is very exciting.

Nordvegen History Centre (museum) is where king Harald Fairhair invites us in to walk in the footsteps of our ancestors. This is featured in the film above. It is a fine museum with an audio guide through a 3500-year long history about Avaldsnes. It has a lift so is mobility impaired friendly. It sits next to

St. Olav’s Church which falls much later in history. St Olav is credited with converting the people to Christianity, the church was erected by King Håkon Håkonsson. What is interesting is that buildings in Norway were mainly of wood, and the church and adjacent houses were built in stone showing great wealth and power. The needle at the side does not lean on the church, if it were to touch the wall, legend has it that the world would end. The church is going through major renovations 2018-2020 so access may be zero to limited in this time. Afterwards, it promises to be wonderful.

Archaeological excavations have revealed secrets and we are one of the first to film this site. Jean explains a little of what has been found, but much more is expected to be revealed of Harald Fairhair’s court and King Håkon Håkonsson. Many projects are looking into this interesting area which in years to come will be a medieval park.

In a more mini theme park manner down the hill (quite a walk, and steep in places) is the Viking farm. This is a reconstructed Viking encampment. It has a traditional longhouse and smaller dwellings seen on the film and explained by our Viking guide!

The Vikings have been resurected with the wonderful drama The Vikings, made by the History channel it is now re-running on 5-SPIKE and is a top-class drama to challenge Game of Thrones. It is very real, and the violence that these pirate warriors showed to both each other and their enemies is not held back on. Many will claim the warriors were originally Danes, but there is a mix of from Norway, Sweden and Denmark who became a political a dn powerful force to be reckoned with throughout Europe. The Viking Age was the years between 750 – 1100, but from their travels and power came their own down fall as they adopted new ideas, cultural impulses and Christianity. The Viking ship is still celebrated in many places including Shetland.

The cruise size luggage labels are a hot recommendation, the other items are fun.

Written by our own producer, this is a fast novel. Cruise Heist has more than rough seas to deal with. Most crew and guests are totally unaware of the goings on in this great fiction thriller where South American money is smuggled aboard and the ship gets very rocky.

Out now on Kindle only. Paperback out later this year.

Researching the destination before you go can help you choose, understand the port talk easier, save money and time. Or chat with others who have been there on one of our chat sites.ANDALSNES BERGEN FLAM OLDEN OSLOFJORD SKJOLDEN STAVANGER TROMSO REYKJAVIC AKUREYRI ALESUND ALTA BODO EIDFJORD KLAKSVIK TORSHAVN GEIRANGER HAUGESUND HELLESYLT HEIMAEY HONNINGSVAG ISAFJORDUR KRISTIANSUND LOFOTEN ISLANDS LONGYEARBYEN NARVIK NUUK QAQORTOQ TRONDHEIM