It is an easy port to walk round. Monaco is actually smaller than Central Park in the USA. If about 6 modern cruise ships pulled up on the same day they could double the population of about 38,000. The Grand Prix is always the week after the Cannes Film Festival, because many of the film buyers and sellers work the film market of Cannes, then relax in Saint Tropez just up the coast, then go to Monte Carlo for the Grand Prix. 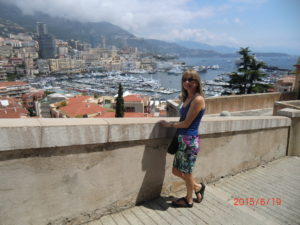 Lilly Langtry went to live in Monaco after her affair with Edward VII ended. So many of the rich and famous have been there, but she was the first woman to break the bank at Monte Carlo, or so they say. Doris Visits has some very interesting films on Lillie Langtry and her Trysts with the King. Click here for the Lillie Langtry story, blog and films.

Monte Carlo is on the French riviera but it is the administrative area of the Principality of Monaco. Monaco is a sovereign state and micro state bordered by France, it is not technically part of France. The house of Grimaldi has ruled Monaco since 1291 with few interruptions. The official language is French, but they have their own language and some speak Italian. Monaco is not part of the EU but joins in with them on policies it wishes.

So, how did this come about? It was Roman, they gave it to the Genoese, it was contested by the Grimaldi family who took power with the help of Genoa… confused? France and Spain left it alone until the French revolution. Then they felt they had it until Napoleon was defeated. – don’t mention the war! So it then came under the Kingdom Of Sardinia until Sardinia became part of Italy, then both Italy and France allowed it to be independent. Then in the second world war, it was briefly under the Italians, then the Germans, then back to where it is now.

Monte Carlo is famous for the four ‘G’s’

Mega-yachts line the harbour, Monte Carlo is famous for the four ‘G’s’: the Grimaldi monarchy as well as its Grand Prix, Glamour, and Gambling. The famous GrandCasino is only one of several but, if you are feeling lucky, note that it operates a strict dress code and requires all players to show passports. Monaco’s three main districts are all walkable from the harbour: 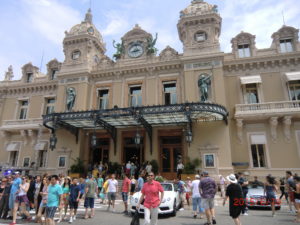 Monaco Ville is the intriguing old town. According to ancient myth Hercules passed through here when he turned away from his other Gods. The name Monaco comes from an ancient 6th-century Greek settlement.

La Condamine (business centre), and Monte Carlo, the glitzy new town with the casino the fun areas and cinema in the cliff. Grimaldi Prince Rainier III put Monaco on the map by marrying film star Grace Kelly in 1955 and he is now buried alongside Princess Grace in St Nicholas Cathedral in Monaco Ville. There is a walkway that goes through the park along the top of the cliff and comes out at the Palace and some nice shops. It is all easy to find. This is a tender port and if it is windy you may miss this port because the tenders may not be able to get in..