It is normal to arrive around 8am and re-board by 1630hrs from a ship.

Cartagena is located in the Region of Murcia and is very often on a Mediterranean cruise. It is an important Naval Port as well as the gateway to Murcia. It has been inhabited for two millennia, and the town was known as Mastia and was one of the Mediterranean’s best harbours. Carthaginian general Hasdrubal re-named it in 228 BC as Qart Hadasht (New City). It later became an important Roman city known as Carthage Nova with a major silver mining industry as well as fish which they fermented.

Cartagena has the second-largest Roman theatre in the region, which was uncovered in 1980. There is an abundance of Phoenician, Roman, Byzantine and Moorish remains, and a plethora of Art Nouveau buildings, a result of the bourgeoisie from the early 20th century. There are local guides who can explain the history.

Cartagena has always been important and has been the capital of the Spanish Navy as far back as the 16th century. The park on the hill overlooking the amphitheatre is a relaxing walk, the castle at the top has a museum which charges a few euros for entry. The views are spectacular. The naval museum and submarine are features. 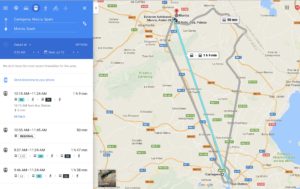 This is an easy port to walk around.

If you wish to travel to Murcia take a tour or check the journey with Google.com/transit

Check our tours to give more information. Get Your Guide or your cruise ship website.

Like all ships, the Britannia is always popular on this Mediterranean route so book early to take advantage of Early Saver Deals when available for this cruise. Find a LATE DEAL over a coffee from your armchair? Doris Visits allows you to SEE THE CRUISE BEFORE YOU CRUISE THE SEA. We have videos of many of the cruise stops you might make from Miami to Tahiti, from Bruges to St Maarten. Please follow us on Facebook and Twitter and share.

Cartagena is normally on the Strictly Come Dancing Cruise, one of the best cruises ever.