Cruising: Doris Chats We love to cruise
Home 11 Baltic Helsinki Helsinki – the changing of the guard gets photobombed 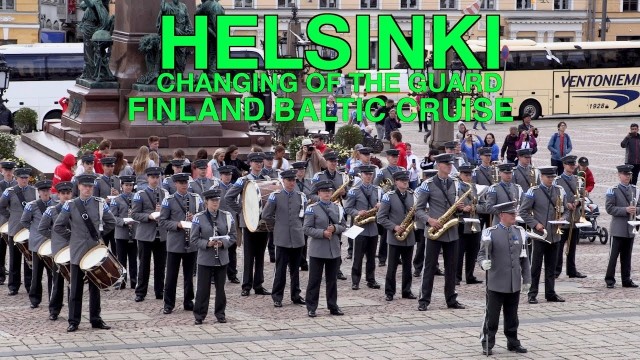 One could bravely suggest Helsinki is always on a Baltic Cruise itinerary, but is that always the case? Well, more often than not it is. It is a small city with a great shopping centre near to the port, so those who love to shop are catered for. Those who want to see what is on the suggested highlights should catch our main film on Helsinki which even gets to the Rock Church.

This film shows the Changing of the Guard which happens almost every day in summer in the main square just in front of the Cathedral that is used in the cruise novel when someone has just been poisoned but won’t die …. Perfect Storm. I diverge, at 1230hrs most days, in this very central square just a few blocks back from the harbour, they have the changing of the guard. People sit on the Cathedral steps which makes an ideal raked amphitheatre and watch and film, as our film shows. If you are planning this, then want to see them perform in the Esplanade park by the shops later at 1430hrs your day will be organised around those two times and places. FRED OLSEN BALTIC CRUISE MARELLA BALTIC CRUISE P&O BALTIC CRUISE SAGA new ships in BALTICFind your ship’s chat site + share your pictures + experiences to help others

TAKING DRINKS ON BOARD ? CAN I ? HOW MUCH ? What makes this interesting is the fact that this event gets photobombed, by that I mean people try and enter the picture the moment the band start. This is a great photo bomb, and it is something film and media expert Stuart St Paul talks about on ship when he discusses his film career and media exploitation. Photo opportunities such as this are either for fun as this was, or for press and promotion.

If you were doing this for full press coverage like the circulated picture of Gareth Southgate carrying a trophy cabinet out of IKEA straight after the semi final win, you plan it. In that case the IKEA sign and building were so perfectly lit and framed that it looks like a PR masterpiece than an amateur joke. The fact that it was followed by a Teresa May one, her at her desk ringing IKEA to say her cabinet is fully apart shows a trend. In the case of these gymnasts, they did not do what the English under 17 squad did in India and sell themselves. The football quad turned their shirts round for all the pictures after winning, a brilliant self advertising and well thought out move. The TLA gymnasts were not after such promotion because they didn’t wear the red TLA jackets those on the floor were wearing which would have stood out more against the greenish back ground and sold their logo if in had been printed huge. This was done for fun and was harmless. If you have seen Stuart’s talks on making movies, how they are financed and sold and promoted then you will get this totally, if not look out for him on ship. Next on the Ventura N826 and Queen Victoria V833. If you have ever wondered why Ventura’s cruise numbers don’t start with V, but N, now you know. The company’s Queen Victoria has the V.  CRUISE INSURANCE