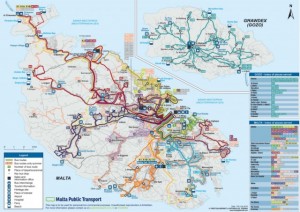 Valletta is the port city with two cathedrals and a bus garage. The latter is the key to exploring as the public buses can take you anywhere. In this film, we take you to the bus garage and show you how easy it is to find a bus to anywhere on the island. So, from the southernmost capital of Europe, you have so much to see. Download the bus route map from this page or click the picture. Google.com/transit works well in Malta.

For example, to get to Mdina, take bus C2. The journey is 32 minutes. It is the island’s old capital start with the impressive walled city with Medieval and Baroque architecture. It is called the Silent City because cars are not allowed inside. Instead, it is a horse and carriage town. 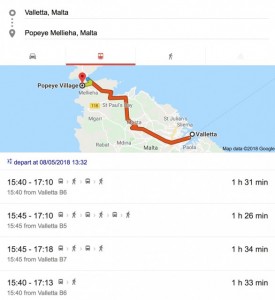 Popeye Village is where they shot the film Popeye with the late great Robin Williams. It is like they never pulled the town down and it is a wonderful day out for kids of all ages including us seniors and is worth the informative 90-minute bus ride there. It was built for the film in 1979 and has never been so alive as it is now as a working theme park

See our blog on the village with film.

Three Cities. Sliema is a direct bus round the harbour in under 20 minutes. These streets are quieter than Valletta, and as pretty with as much to see, plus further round the coastline opens up to beaches.

So here is how to get to the bus station and find a bus – the Malta Guide shows you how to go up in the lift. Walkthrough the square and turn left down Millennium Way.

Other great destinations in Malta –

BEACHES – There are beaches all along the Sliema Coastline, though Malta has some excellent plus beaches, these are further North taking over an hour or by boat.