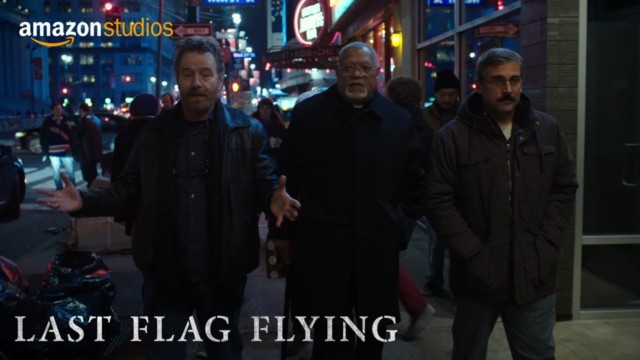 In an effort to help you enjoy your cruise, and as many ships either have a cinema or a sea screen or both, and as many of you may not be abreast of what is in the cinema, we have added a film section to occasionally explain, rather than critically review films, that we know are on or will be on board ship. The first is a great film, a drama, The Last Flag Flying.

When you are an Academy or BAFTA voting member you know when the ‘awards season’ has started in ernest. Not ignoring that we are invited to screenings and events all year round to encourage and solicit our votes, but just before Christmas hundreds of films have their publicity scream watch me and vote for me. Too many twitch once the invites come thick and fast and the film awards first round of voting accelerates towards us. Recently I attended a screening of The Last Flag Flying at the private screening room of the Mayfair Hotel, a favourite of mine for these events. It was with guests, director Richard Linklater (Before Sunset etc) and actor Bryan Cranston (Breaking Bad). I like it when I see a film that ‘sets the bar’, that gives me a clear base for best film, best actor, best supporting actor and makes me say to others, as good a s you are, you are not in that league. It is like watching any talent show, like X Factor where you go, she or he is good, but not in the league of Grace Davies who just stands out as one to beat. Or like Ashton on Strictly. That is talent that sets a bar, even if they don’t win. I seriously really liked The Last Flag and as a film maker I am often hard to please. I don’t think that it was just that I had been in Boston and been in New York, this movie, which is a road movie, or a car movie, certainly a journey movie is easily understated by such labels. It is without doubt an acting masterclass from three guys at the very top of their game, Cranston supports an amazingly understated performance by Steve Carell well worthy of Best Actor. We will see. It is a crime that Laurence Fishburne is likely to be overlooked because his performance is a master class in acting too. That is by no means ignoring the rest of the class including young new comer J Quinton Johnson who is like a fantastic young footballer who has just got the opportunity to kick a ball around with three legends, both in story terms and working life. These three guys get together in an unexpected union, and they end up moving a body from New York to Boston. In what could become a farce in lesser hands is a moving drama that never over steps, not even when the players perform what is the iconic scene in the train. I am giving less away than the film’s description, but you will discover all in this must see drama.

I am always amazed at some of the daft questions the honoured guests are asked at the end of such a film so often I hold back, in case my question is just as stupid and I hadn’t noticed. However, I wish I had asked Linklater about his choice or railway station in New York. I had just been in New York with my wife, presenter Jean Heard here on the travel show Doris Visits and wondered around Grand Central Station while she was filming. My question would have been to Richard, that if the station he used was not Grand Central, and it didn’t look like it, nor did he expose it as such, did he consider using it? Or if he did use it, did he consider using the more iconic views of it, or was it too loud and too much of a statement to impose on such a drama? But then I think I know the answer so the question is not worth asking. The station would have been wrong, The Last Flag is not a Sleepless in Seattle moment at the top of the Empire State Building. This is about three lives and one that has past and a truly emotional film that did not need to be upstaged by a location. Our journey was made by ship, so is totally different but by all means take a look.

The links I have made are to Jean’s travel films for you to have a look round New York and Boston before you see The Last Flag because this is a travel site. New York Library where Ghostbusters shot a scene, Empire State building where Tom Hanks did turn up, Boston Guide and the Cheers Bar. I saw so many places that feature daily in film and TV; maybe that had an effect on me, but I would like to think my judgement as a film maker was not ambushed. I did make a film in New York, one remembering my jump of the State of Liberty for American Werewolf in Paris….

What is also interesting is that the film is made by the on-line TV and FILM company AMAZON. On-line TV is fast approaching and broadcast TV is definitely doomed. Judge for yourself as to whether Grand Central station is just too loud a character for The Last Flag Flying!

Stuart St Paul’s film on jumping of the Statue of Liberty for the movie American Werewolf in Paris, was shot for Doris Visits while in New York.